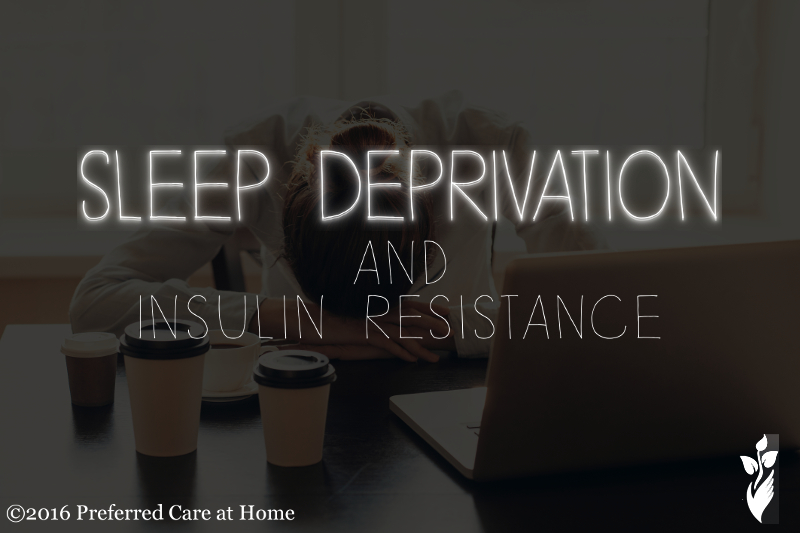 I have written on the subject of sleep deprivation before because I know as caregivers we are not apt to get the amount that we need yet it is so vital to our well-being.

Modern medical science is continually uncovering more evidence on the importance of an adequate amount of sleep.  One such study describes the relationship of sleep to insulin resistance.  Also, the topic of insulin resistance and its correlation to diabetes is certainly of utmost interest to the American public.  The Centers for Disease Control and Prevention (CDC) cited 2014 statistics that 29 million people in the US had been diagnosed with diabetes.  That’s 9.3% of the population.

According to Dr. Melissa Conrad Stoppler, as defined in her article titled “Insulin Resistance” on MedicineNet.com,  “Insulin resistance (IR) is a condition in which the body’s cells become resistant to the effects of insulin. That is, the normal response to a given amount of insulin is reduced. As a result, higher levels of insulin are needed in order for insulin to have its proper effects. So, the pancreas compensates by trying to produce more insulin. This resistance occurs in response to the body’s own insulin (endogenous) or when insulin is administered by injection (exogenous). With insulin resistance, the pancreas produces more and more insulin until the pancreas can no longer produce sufficient insulin for the body’s demands, then blood sugar rises. Insulin resistance is a risk factor for development of diabetes and heart disease.”

In reading on the subject of sleep deprivation, I was surprised to find that even a single night of poor sleep can cause the liver to become less resistant to insulin.  Dr. Wes Youngberg, a lifestyle medical specialist, explains the scientific conclusions of recent medical case studies to us in non-medical jargon.  Dr. Youngberg says, “Under the influence of sleep deprivation, the liver quits its work of processing, and dumps sugar in the bloodstream.”  Dr. Youngberg notes that many people with diabetes have high blood sugars first thing in the morning.

Sleep deprivation elevates blood sugar levels. Elevated blood sugar is a signal to the pancreas to produce more insulin and certainly a diabetic, more than anyone, needs to control the amount of insulin that is released.  Insulin is a very important hormone in the body and plays an intricate role in how our body functions.

When insulin levels become excessive cortisol balance is disrupted.  Cortisol is one of the stress hormones and is linked to the immune response.  Fluctuations of cortisol can lead to many undesirable conditions including the dysfunction of other necessary hormones.   The body can then take a roller-coaster ride exhibited by erratic mood swings, wavering energy levels, and high and low blood sugars.   Fluctuations in cortisol can also greatly affect one’s ability to concentrate and common sense can be significantly diminished.   Long term effects of insulin resistance are deadly.  The publication, Diabetes Care, states that “Insulin resistance, with its resulting excess insulin production, is a primary factor promoting cardiovascular disease.”

So, with these facts in mind, and all the scientific evidence that insulin resistance can wreak havoc with our bodies, as a caregiver it is very important that you get the right amount of sleep!  There is only so much that can finished in a day!  And as you will always hear me say, seek help, you are not in this journey alone.  Don’t wait until you are so exhausted that mistakes are made, you find yourself at completely overwhelmed and your health is also suffering.