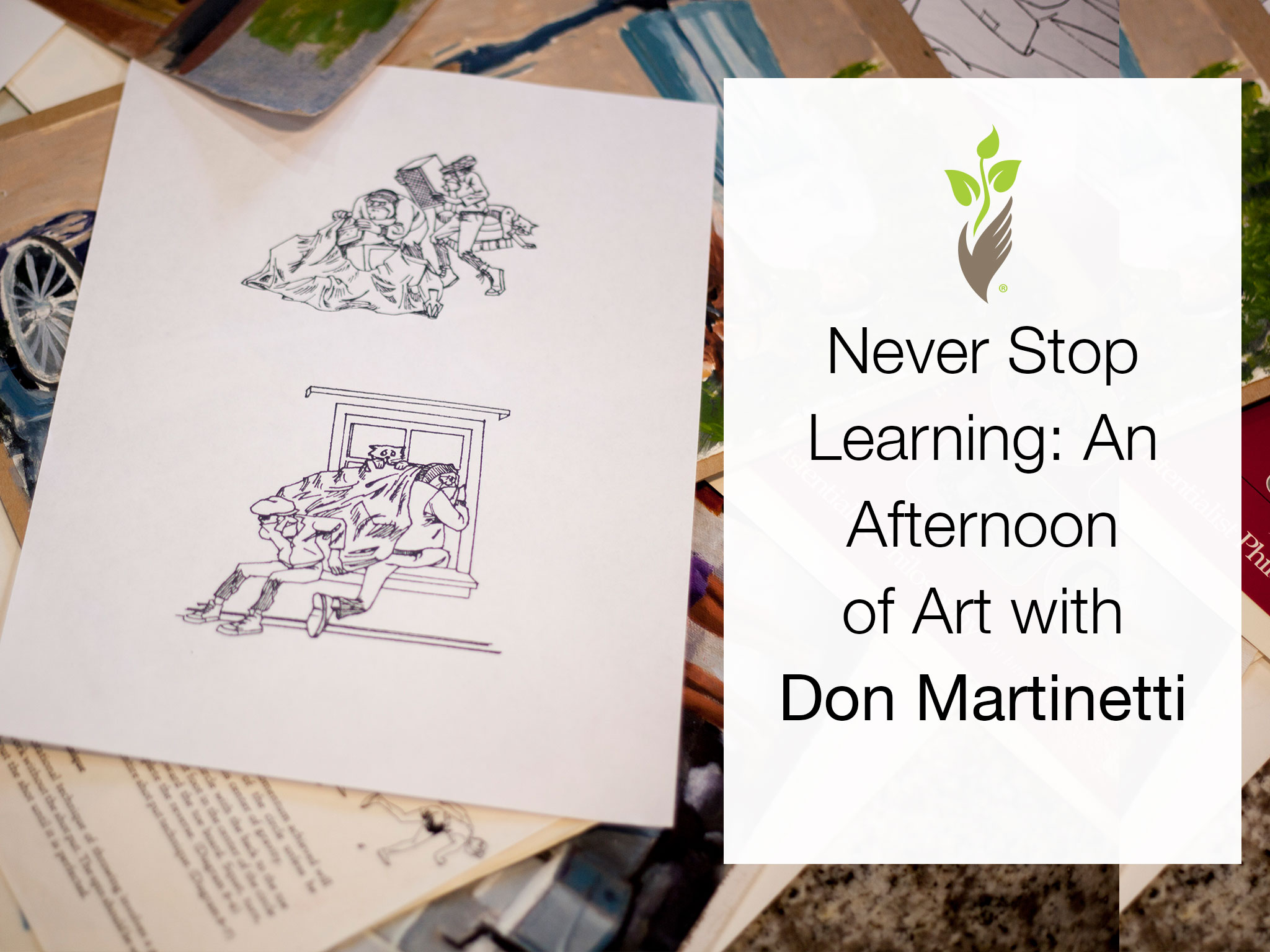 Never Stop Learning: An Afternoon of Art with Don Martinetti

“Do you prefer to be the student or the teacher?” I asked. I sat in a cafe with Don Martinetti, an 84 year old artist. A pile of illustrations and paintings were stacked on the coffee table, just a small sampling from a long and vibrant career.

Don laughed, “Student!” He said without hesitation. His answer was telling of a life spent looking for new challenges and perfecting his art.

After four years in the Navy, Don attended Newark School of Fine and Industrial Arts and graduated in 1958 with a major in Illustration.  He went on to apply for and was accepted into the art program at Cooper Union. For the next two years he attended evening classes in 2D design, lettering, architecture and drawing while working at an art studio in New York City and later for Prentice Hall, a book publisher in New Jersey.

There was no doubt that Don was immersed in the world of art, but it wasn’t enough. He realized that he wasn’t being challenged enough at Cooper Union and changed directions and studied at the Art Students League of New York under Frank Reilly where he remained for three years. The classes were held from 7:00 to 10:00 five nights a week and every Tuesday Frank Reilly lectured about drawing and every Thursday he lectured about painting. Always looking to improve and learn, to this day, Don reports, he still refers back to those notes from time to time.

Over the years Don’s career brought him continual challenges. He worked for publishers, advertising agencies, a toy company, an electronic company, and several art studios. He created ads, brochures or campaigns for clients such as Revlon, United Artists, Paramount Pictures, Embassy Pictures, to name a few in a long list.  In 1979, he became a free-lance artist and illustrator and continued his career primarily as a book illustrator. As a free-lance artist he illustrated English as a Second Language books.

“Do you see that cat?” Don pointed to a terrified cat whose home was being looted by a pair of goofy robbers.

“I always liked to add something fun to the illustrations that don’t impact the story line,” said Don, as I laughed at the expressive cat getting scooped up and taken out the window with the the rest of the possessions. “The author really liked that!”

Today Don is retired, living in Delray Beach, Florida. Now the student has become the teacher. He teaches oil painting at the Lake Worth Art League. But the truth is, Don will never stop being a student. Everywhere he looks it is apparent Don sees an opportunity to learn.

“I always wanted to learn how to paint.” I admit as I shuffled through this collection of artwork.

“You can!” Don encourages.

Don talked about the different adult classes offered in the area, favorite painting techniques, and ways he encouraged his students to learn. It was a delightful afternoon filled with stories, paintings and illustrations.

At 84 years old Don Martinetti has spent almost his entire life with a paint brush or pencil in his hand. But even with that experience, Don never stops looking for opportunities to learn.

Don will have a selection of his artwork displayed at the event on Tuesday, May 5 from 12:30PM to 3:30PM.