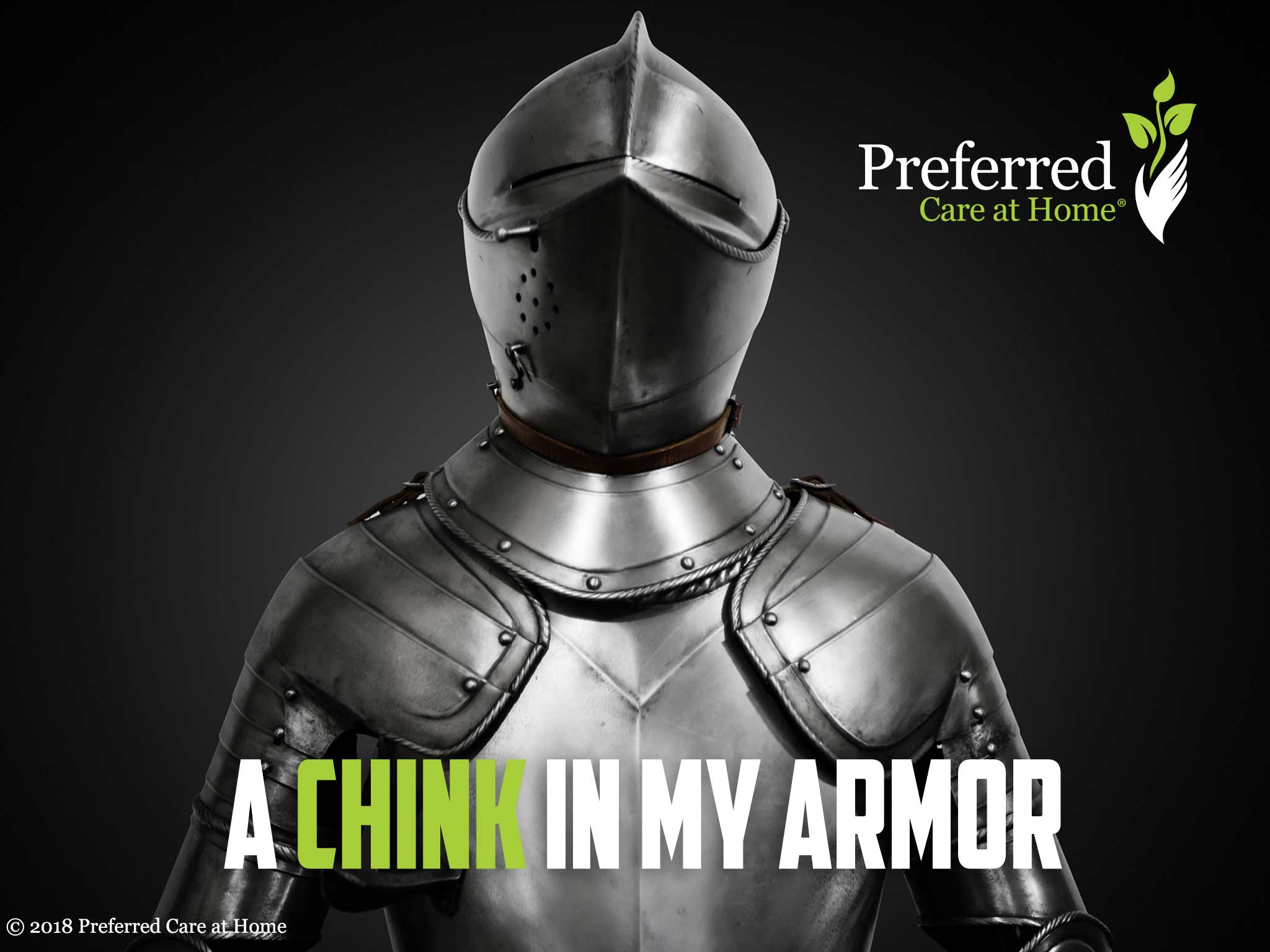 A Chink in My Armor

Greetings one and all…

Fall is making its presence known today in Denver. A dreary day with sporadic rain and nippy temperatures. Time to pull out the sweaters and make a pot of chili. It is also perfect weather for sipping a cup of hot tea and musing about life. Over the past few days, I have been reflecting on a conversation I had with a former colleague (now friend) last week. Over lunch, we caught up on the basics of life. What are you doing? Where have you been? How is work? And how’s the family?

Once we covered those bases, I asked about the health of his wife. Many years ago, she was diagnosed with a progressive, neurological disease. Usually when I inquire as to how things are going, my friend provides a cursory update. He is calm, cool, and collected. But this time was different. This time, he allowed me to see a chink in his armor. He took the risk of being vulnerable and sharing his angst with me. I was so incredibly honored and humbled, because I know how hard it is to admit that things are NOT “fine.”

Since the initial diagnosis, the countless changes and challenges posed by the disease process obviously affected my friend’s entire family. How could it not? Based on my personal experience as a family caregiver, I know how daunting the journey can be. And yet, my friend presented an image of certainty and control to all the world over the past 15 years. Recently, however, an acceleration in the progression of the disease is undeniable. He bravely admitted the difficulties of witnessing the physical and the cognitive decline of the love of his life. He noted that he rarely allows himself to wonder “WHY?” this is their fate. But the question is haunting him of late. He then stared out the window of the restaurant—chin quivering and tears flowing. At that moment, I was transported back in time—to a time when I revealed a chink in my armor to a dear friend.

The year 1992 was a tough year to say the very least. I felt as if the sky were falling as a series of major changes and losses unfolded in a short period of time. Hence the hard hat! I filed for divorce. I transferred to a different state. My dad had a stroke. And I changed jobs. Not my typical year! In the midst of all the mayhem, I reached out to a trusted friend and shared my woes. She listened. She cared. And yes, she saw a chink in my armor. Thank goodness!

Although we had been friends for years, I had never been that real, that raw, or that vulnerable with her before. Seeing through my facade of controlled perfection, my friend finally witnessed my humanity. I could no longer pretend that I had things under control! Instead, I admitted that I wanted and needed help from my friends and family. By so doing, our friendship grew in depth and breadth as I allowed her to see the real ME. As a result, I realized that a chink in my armor provided the necessary portal to connect with other people—the opening that ultimately transformed my life.

As the memories of my “opening” flashed across my mind and heart, I refocused on the present moment and my friend. I listened. I cared. And I prayed that the chink in his armor will allow his friends entrance to support and to embrace him in the weeks and months to come as his wife continues to decline. He will need every hand and heart that is offered. And I hope he learns, as I did, that allowing others “in” enriches the journey of Life for all concerned.

I look forward to the ongoing conversation. If you have specific questions or concerns related to your caregiving experience, I would love to hear from you. Until the next posting, I wish you and yours countless blessings…jane